The CBS national news is featuring a story today that I appeared in as a PANDAS expert. PANDAS is a medical condition affecting kids where their immune system attacks their brain when they get sick and gives them things like tics, OCD, anorexia, rage and cognitive impairment. It’s vital that awareness is raised because so many kids get misdiagnosed and don’t get the treatment they need.

Check it out here

End of PSA. Here’s the deal:

The story is a personal vindication for me. After my trauma, the story-slash-international-sex-scandal hit the AP wire and was featured in national and international news. It was not a flattering story for me. My name isn’t mentioned; I’m called simply, Noyes’s sex slave (should have read RAPE slave. there I fixed it for them). It led to a public shaming that contributed to my chronic PTSD settling for seven long years.

The head of my med school said I’d never be a doctor because of my moral failings. Not only am I a doctor (make that, an expert) but I am using my degree to fight the good fight. Quite the opposite of what she uses hers for.

Forgive them Lord for they know exactly what they do and do it anyway but you are a merciful God. Good way to flex your mercy muscles.

2017 is drawing to a close and here I am again, writing another reflective end of year post. I haven’t written in this blog in quite some time as I have a blog on my medical practice’s website now. This blog is really about trauma (although that’s not what I intended when I started it. Life’s funny that way I suppose). It’s about trauma in general and about one trauma in particular. The trauma Jeremy brought to me that cold snowy winter of 2008.

The trauma started January 2008. I began healing in January 2009. I got the subpoena written out by he himself to testify at his trial January 2011. I had my final healing from PTSD January 2015. And so…. January. January is coming again. 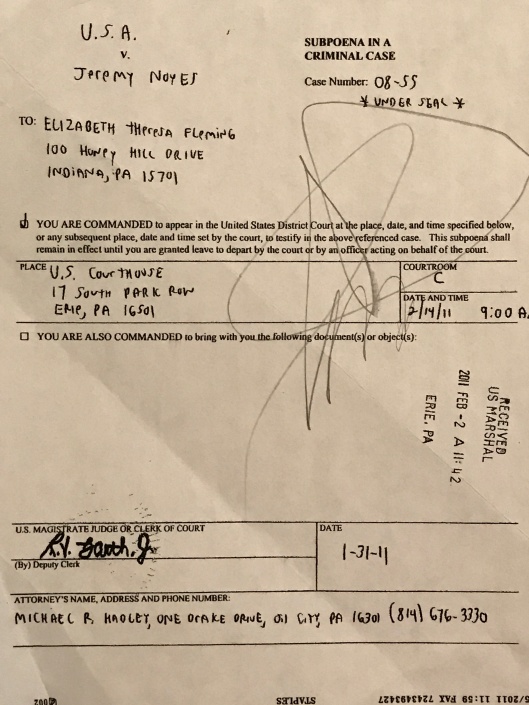 So what should I get to commemorate the occasion? A tin man? A Coke can? Perhaps an aluminum foil hat to block aliens from stealing his thoughts?

The thing I have in common with him is that he and I both think about The Ordeal everyday of our lives without fail. No one else does. Not consistently. Not without prompting.

My relationship with Jeremy has changed over time but I will always have one with him. From Stockholm Syndrome to fear to anger to forgiveness and then back and forth a few times. To compassion. Ok, sarcastic compassion at times, but compassion nonetheless.

My husband is reading a book about domestic violence right now and we ended up having a conversation last night about the importance of being able to confront an abuser and bring them to task.

“Did you ever do that with Jeremy,” he asked me

“No. I sent him to prison for the rest of his life. I really didn’t need to say anything”

“No but did you ever assert yourself with him verbally. In the courtroom maybe? I wasn’t there when you testified.”

“No… no. He was completely out of touch with reality. He said “I forgive you.” to me”

Eric continued on about the importance of this confrontation of the abuser and I interrupted him and shut him down. Just… no. No. This conversation wasn’t happening. I had no energy for it.

His point was that Jeremy needed that in order to come to terms with what he’d done. Bullies will never change if no one stands up to them. My point was that Jeremy is delusional and believes my sister and I orchestrated a grand conspiracy to frame him with the entire FBI backing us. He honest to Jesus Joseph and Mary believes that raping little girls is actually good for them, so… I’m really not seeing this asserting myself thing doing a whole lot. And quite frankly, if sitting staring at prison bars for 45 years doesn’t cause you to do a little soul searching, I’m pretty sure a sassy physician confronting you ain’t gonna do it either.

He continues the discussion of abusers as bullies and you need to stand up to bullies and all that and my mind wanders back to the courtroom. Back to the bedroom. Bitter, grey Erie. That uneasy feeling in my stomach. That fight or flight in my muscle fibers. In my eyes, always darting, scanning for danger. As it laid next to me.

There was a discussion at work today about what each of us would do if we won the lottery. Conversation drifts to the importance of buying land as it’s a limited resource and I find mySelf saying “or gold.” They begin discussing the merits of gold versus silver for price stability and my mind wanders back to the gold shop in Erie.

Jeremy was fixated on buying gold. He thought he could make money buying and selling it. He watched the gold markets obsessively. He never slept. I remember that. He was up all night on his computer. Barely slept. He watched the markets and talked to Alex in New ZeLand and researched evil.

He thought he was amazingly smart. Smart enough to outsmart the police. Smart
enough to make it rich buying and selling little gold bars. (Spoiler alert: he’s not)

At some point in The Ordeal he had me take my money and buy gold. I lived off student loans At the time so the money I was to live off of was dispersed in two
payments: one in August and one in January. He had me lend him this money I had set aside to live off of later in the year so he could buy gold. He would then sell it back and pay me back and keep the interest I suppose. I don’t remember the details. I remember very little about it. I remember driving to the bank near the Moe’s to withdraw the money (Welcome to Moe’s!)

I remember sitting in the Cheesecake Factory with my sisters that spring and mentioning the gold to them. I remember the look on my sister’s face and the way she spoke. She spoke to me the way you’d speak to someone holding a gun in their hand about to shoot. She looked horrified. She spoke calmly and slowly. She told me I needed to sell the gold back and put the money back in my savings account. I told her I would. I was glad she wasn’t angry. I was worried by the way she’d talked. Was I crazy, I wondered. She talked to me like I was crazy.

I remember insisting Jeremy give me the gold back in June. He said, the price of gold has gone down. You should wait and I’ll sell it and you won’t lose money. But I insisted and he complied. I don’t know what excuse I gave him. It worked. That’s all that matters.

I needed to get the money back because I was turning him in. Soon the government would seize his assets. I remember sitting there in the minivan with the broken air conditioning outside the gold shop in Erie. Sweating in my heavy black Land’s End skirt.

Purple scrubs now, standing in urgent care a few lifetimes later. I walk away from the lottery discussion to work on notes. The memory of the Cheesecake Factory is unsettling. It fills me with shame. What decisions I made at that time of my trauma were mine and which were not? Maybe I would have done something crazy like buying up gold even if I hadn’t been in a situation where he controlled me through force.

If so, do I deserve to feel ashamed? No. I remind myself of this. I take a deep breath and let the shame go. Sort of. Hey, life’s a process. Don’t rush me.

So maybe I should get Jeremy something gold for our anniversary? No. Gold was a mistake. I’ll definitely stick with aluminum this time. Maybe foil for the rabbit ears on the prison TV so he can learn about PANDAS and the good fight.